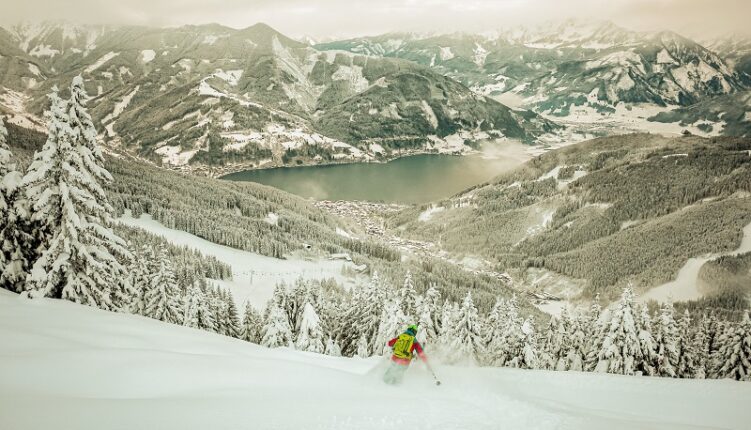 The Kitzsteinhorn glacier ski resort entices with wide glacier slopes and natural snow all year round. Whether fresh powder snow in autumn or sunbathing in spring, glacier skiing remains a unique experience in the Kitzsteinhorn ski area. Especially on the 41 kilometres of pistes, snow-hungry skiers will find all facets of an unforgettable skiing experience.

The highlights of the mountain summarized:

The Kitzsteinhorn ski area is one of the most varied freeride eldorados in Salzburger Land. The five signposted freeride routes offer the right terrain for all skill levels. You can find a detailed overview of the routes X1 “Ice Age”, X2 “Westside Story”, X3 “Left Wing”, X4 “Jump Run” and X5 “Pipe Line” at www.kitzsteinhorn.at.

There are a total of 3 snow parks and a superpipe on the Kitzsteinhorn. All action-hungry freeriders can shred the Glacier Park on the glacier plateau from early autumn on. Especially from December, the Easy and Central Park are ready for all adrenaline junkies. Pro kickers up to 18 metres can be found among the numerous rails and boxes. At 6 metres, the superpipe is one of the biggest in the country.

Just above the Alpine Centre, the Ice Camp rises out of snow and ice. Every year, 60 tonnes of ice are built on an area of 5,000 sqm. Three interconnected igloos, an ice bar and the Audi Show Room are the highlights of the Ice Camp. Loungers are available in front of the igloos for extensive sunbathing.

K-onnection | From the Maiskogel to the glacier

For decades we have dreamed about it and now it is reality! The 3K K-onnection is ready. We go from the centre of Kaprun to the glacier Kitzsteinhorn via the new connection. The 10-cabin monocable gondola starts at the new Kaprun Center and takes 2,800 guests per hour up the family mountain Maiskogel. From there, the first three-cable gondola lift takes you to the Kitzsteinhorn glacier. Find all the information about this massive undertaking at www.kitzsteinhorn.at.

The piste map for the Kitzsteinhorn ski area with all open lifts & pistes can be found at www.kitzsteinhorn.at.

The Black Mamba is the most difficult and steepest slope in the Kitzsteinhorn ski area. With up to 63%, the slope demands everything from even the most experienced skiers. Branching off from the Kristallbahn valley station, the 1000-metre challenge ends at Langwiedboden.
Our TIP: If you want to conquer the Black Mamba, you should take on the slope in the morning – the more people on the slope, the more difficult and icy the adventure becomes.

This makes a total of 408 kilometres of pistes divided between 3 premium ski areas – you can find the piste map at winter.intermaps.com.

A leisurely ski tour if you don’t want to go too long. From Langwiedboden you start along the piste to the Alpincenter. You start at a good 2000m. The Alpincenter is at 2450m – so you cover a good 450 metres in altitude. The Schneekoenigin is primarily a ski tour for the beginning of the season to get back into the swing of things and improve your fitness. Alternatively, you can continue off-piste after the Alpincenter.

The ski tour on the Eisbrecher is identical to the tour of the Schneekönigin at the beginning. You start at Langwiedboden – the route to the Alpincenter is the same. After the Alpincenter, you leave the piste and follow the signposted ski tour path off the pistes.

Last but not least, our last Alpine ski tour leads to the Kitzsteinhorn in Zell am See – Kaprun. Thanks to the ski area, there are of course several options from where you can climb to the summit of the Kitzsteinhorn. From the Gipfelwelt 3000 it is not even 200 metres in altitude to the summit, but we start the same way as for the ski tour Eisbrecher & Schneekönigin – from Langwiedboden.
Till 3000 metres, the tour is along the slopes or along the signposted ski tour routes. The summit’s slope and thus the last 200 metres in altitude are very demanding and hardly manageable on skis. Crampons & a mountain guide are definitely recommended. At 3203 metres, the efforts will definitely be worth it – a fantastic view of the Kaprun reservoirs and the surrounding mountains, all the way to the Großglockner.

As with all ski tours on the Kitzsteinhorn, we also start this ski tour on the glacier from Langwiedboden at 1974m. Unlike the above-mentioned ski tours, on the ski tour to the Tristkogel we branch off immediately in a westerly direction and climb a good 700 metres in altitude off the pistes to the Tristkogel. A super ski tour that is rewarded with great powder descents, especially when there is fresh snow.

Still looking for the perfect accommodation near the Kitzsteinhorn glacier ski resort?
Check out our APARTMENTS & CHALETS.

Winter in Zell am See-Kaprun

Tobogganing in Zell am See

Winter in Zell am See-Kaprun

Motorcycle tours in Zell am See-Kaprun

Paragliding & skydiving in Zell am See-Kaprun

Bike trails in Zell am See-Kaprun